A documentary film about boat builder Axner Bodin from Herrvik on the Swedish island of Gotland.

Axner Bodin lived until he was 87 years old. He lived and worked in Herrvik his whole life.

He inherited his profession after his father who founded Bodins Boat Builders in 1898.

He learnt his profession from the ground up from his father and became a very skilful boat builder, regarded by many as one of the most multifaceted and skilful on Gotland.

Axner built approximately 250 boats, everything from small two to three man boats to large salmon cutters and trawlers. He was building boats during Gotlands fishing industries most important period of development.

But it was not only a knowledge of boat building he had attained. What he didn´t know about motors, depth sounders and electronics was not worth knowing about. If you´d ask him anything about these matters he would answer decidedly but humbly that, he probably knew something about it. That, he dared to say.

In later years he ceased to build new boats but there was still a lot to do with maintenance and repair. Axner kept the many fishing boats who found their way into Herrvik harbour, going strong and enjoyed the challenge in fixing and finding solutions for everything.

Axner worked right up to the day of his passing, six days a week, in the same way that he always did. On the weekdays he worked until 6pm and on Saturdays until noon. Then he took his bicycle and rode home to “do as I want” as he put it.

Axner passed away December 2003 when his house burnt down to the ground.

A film about a man who fascinated both with his profession and approach to life. 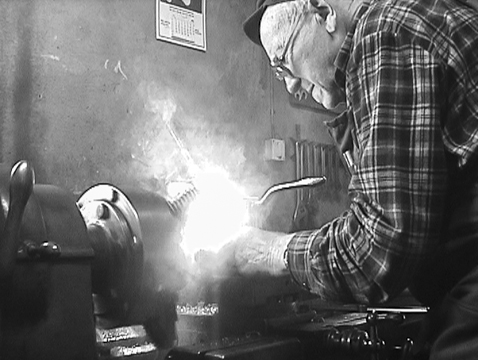 Length: 38 minuter. DVD with subtitles in english, german and swedish.

Susanne has been awarded a grant from the Memory of Björn Lindroth Foundation for her work with film, the motivation:

“Susanne Svantessons films are not only documentations of a forgotten time in the history of Swedish Industry. They are about human dignity.

Perhaps her works are about life´s meaning

Filmscreening on a boatyard

In the autumn of 2006, The king of Herrvik was shown at a completely unique film screening in Slipskjulet at Linds Båtvarv (a boatyard, now Båtkompaniet). The show was a co-arrangement with Yachtsnickeriet. See pictures from the show through the link to the right.